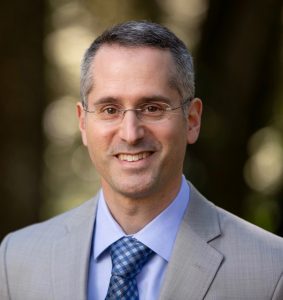 Dr. Melker was born in the Bronx, New York and after a brief period in California, his family relocated to Gainesville when he was only four years old. His Gainesville roots run deep, having attended Brentwood, Glen Springs Elementary, Fort Clarke Middle School and Buchholz High School. Former classmates and hometown friends and their multigenerational families make up a significant portion of Dr. Melker’s practice.

Dr. Melker left Gainesville for his undergraduate years, attending Amherst College in Massachusetts, consistently ranked as one of the top small liberal arts colleges in the United States. There he received his Bachelor of Science degree with a major in Biology and was a Phi Beta Kappa Junior Year Inductee, a distinction awarded to only the top 5% of his graduating class.

After four years in the cold, Dr. Melker was happy to return to sunny Gainesville to attend the University of Florida College of Medicine. Throughout his four years of medical school, he was recognized with several distinctions including the Michael H. Ross Award, the Scott Gross, M.D. Memorial Pathology Award, the Medical Guild Scholarship for Academic Excellence twice, and the Senior Professional Development Scholarship for academic merit. In his last year of medical school, he received the George Singleton Honorary Award for “the most promising graduate entering the field of Otolaryngology.” He was an Alpha Omega Alpha Junior Inductee and the highest ranking graduate in his medical school class.

He continued his education at the University of Florida and during his General Surgery internship was recognized by his fellow Surgery housestaff and faculty as the outstanding surgical intern of the year with the Ray Beirstedt Memorial Award.

During his four year residency which followed in Otolaryngology- Head and Neck Surgery at the University of Florida, Dr. Melker continued to receive accolades including recognition as the outstanding resident teacher by the director of the Medical Student Surgery clerkship, the Resident Book Award for the highest Otolaryngology inservice examination score among UF residents, the Resident Teacher of the Year as voted by his fellow residents, and the Resident Research Award for his presentation “Taking the Next Step in 3D Surgical Education”.

Dr. Melker’s residency research focused on the application of 3D computer modelling in the clinical and educational settings. Self-trained in 3D rendering software (Raindrop Geomagic), he created a “virtual” nasal cavity to assist with nosebleed research.

He was awarded a $25,000 educational grant from Synthes Maxillofacial to create “virtual reality” surgical animations to help train Otolaryngology residents to perform facial trauma procedures, and served as the project director for the animation project “Application of the Locking Reconstruction Plate for Comminuted Mandible Fractures”, commissioned by AO International. His commitment to resident education was also recognized by a grant from Karl Storz to coordinate a bronchoesophagoscopy course to teach residents techniques in the removal of pediatric aerodigestive foreign bodies.

As a busy tertiary care referral center, Shands at the University of Florida offers an extremely broad experience to its residents. The Department of Otolaryngology- Head and Neck Surgery, in particular, has been recognized in U.S. News and World Report for excellence in patient care. Dr. Melker graduated with a large volume of surgical cases in all aspects of Otolaryngology including adult and pediatric surgery.

After graduating from his ENT residency in July of 2004, Dr. Melker entered private practice, joining the Gainesville Otolaryngology Group. In April of 2006, he launched his then solo practice, Gainesville ENT & Allergy Associates, which embodies Dr. Melker’s personal style, commitment to hometown medicine, and desire to serve his greater Gainesville family. He recruited Dr. Hauptman, a fellow UF Medical School graduate, as his partner in 2008. While he truly enjoys all aspects of general medical and surgical ENT care and maintains a broad practice, his focus is sinus surgery and treatment of allergy and its ENT manifestations. He routinely performs complex computer assisted (also known as image guided) sinus surgeries.

Outside of work, Dr. Melker is a passionate advocate for individuals with autism and their families. He is a member of the steering committee of the UF Health Center for Autism and Neurodevelopment (UF Health CAN), serving as the community liaison and fundraising chair.

He also serves on the advisory board of Santa Fe College’s “Spectrum of Success” program that focuses on supporting autistic students as they transition to adulthood and employment. He led the fundraising campaign that allowed the Santa Fe College Teaching Zoo to gain its “sensory inclusive” certification.

Dr. Melker enjoys spending as much time as possible with his wife, two sons and their family dog, spending time working in the garage, exercising, and speaking Japanese.

Internet Correspondent:
Quoted as in “Seasonal Allergy Symptoms: Six Ways to Prevent or Treat Them.” US News and World Report Online. May 2009: http://health.usnews.com/health-news/family-health/allergy-and-asthma/articles/2009/05/01/seasonal-allergy-symptoms-6-ways-to-prevent-or-treat-them.html

“Ebstein’s anomaly”, completed while an undergraduate. In Heart Disease in Infants, Children, and Adolescents. Moss and Adams Publishing.

Web-site designer, “Trigeminal Nerve Anatomy” ©1999 – an online study guide for medical students and patient resource, with a series of companion posters used in the first year gross anatomy lab at the UF College of Medicine.